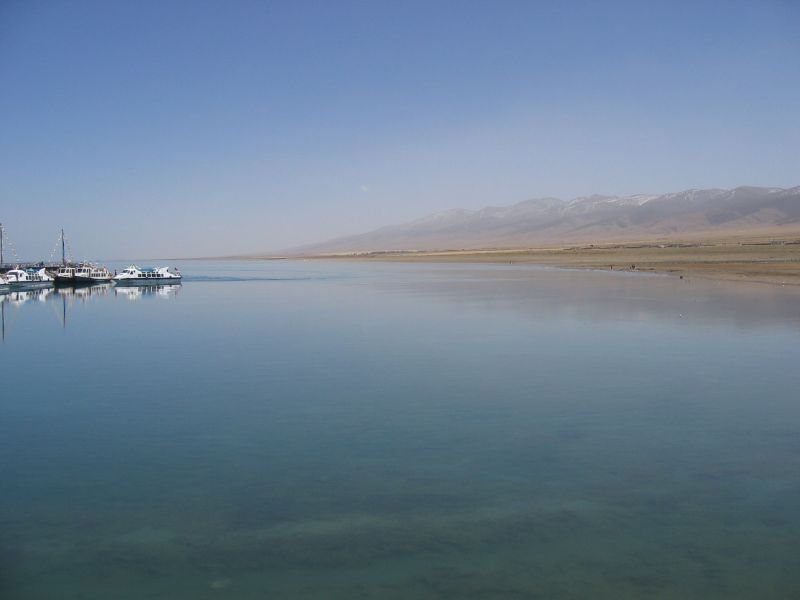 Known as Qinghai Lake in Chinese (meaning Green Lake), Kokonor in Mongolian (meaning Blue Lake) and Tsongon Po (མཚོ་སྔོན་པོ།) in Tibetan (meaning Teal Sea), this largest inland saltwater lake in China is found in the Qinghai Province. Amidst the lofty mountains of Xiangpi, Datong, Riyue, and the South Mountain, Qinghai Lake is spread over an area of 4,500 square kilometers at an elevation of 3,200 meters. The natives believe Qinghai Lake is a miracle bestowed by a deity.

To the west of the Qinghai Lake is the Niaodao, which is the ‘Kingdom of Birds’. Bird Island covers an area of 0.11 square kilometers and reaches ten meters above the lake. The island is a natural habitat for more than 100,000 birds of diverse species such as swan, gull, sandpipers, wild goose, crane, and even the rare black-necked crane. During the spring and summer months, thousands of birds from as far as Southeast Asia flock to their kingdom to breed.

25 kilometers from the Bird Island is Haixin Hill, also known as ‘Immortal Hill’. It lies to the south of the central Qinghai Lake. Haixin Hill is covered with granite rocks, sandy soil, and vegetation. Achnatherum splendens, Kobresia, Thermopsis lancaolata, wheatgrass, and Oxytropis falcate Bunge are the common plants species found on the island. The Hill of the Sea Heart also has temples and clear springs.

The Qinghai Lake is abundant in fish, especially the Huang fish reputed for being the King of the Lake by locals, and the lone alpine saltwater fish in China. In northwest China, the Qinghai Lake is the largest natural fish habitat. During the breeding season in April and May, schools of Huang fish swim to the nearby rivers to lay eggs.

The international ‘Tour of Qinghai Lake’ Cycle Race takes place around Qinghai Lake during July and August every year. Since 2002, this event is among Asia’s top cycling events, and is known for having the highest altitude, averaging over 3,000 meters, of all the international cycling races. With twenty teams, and more than a hundred cyclists from all over the world, the race covers a distance of 1,300 kilometers and takes nine days to complete.