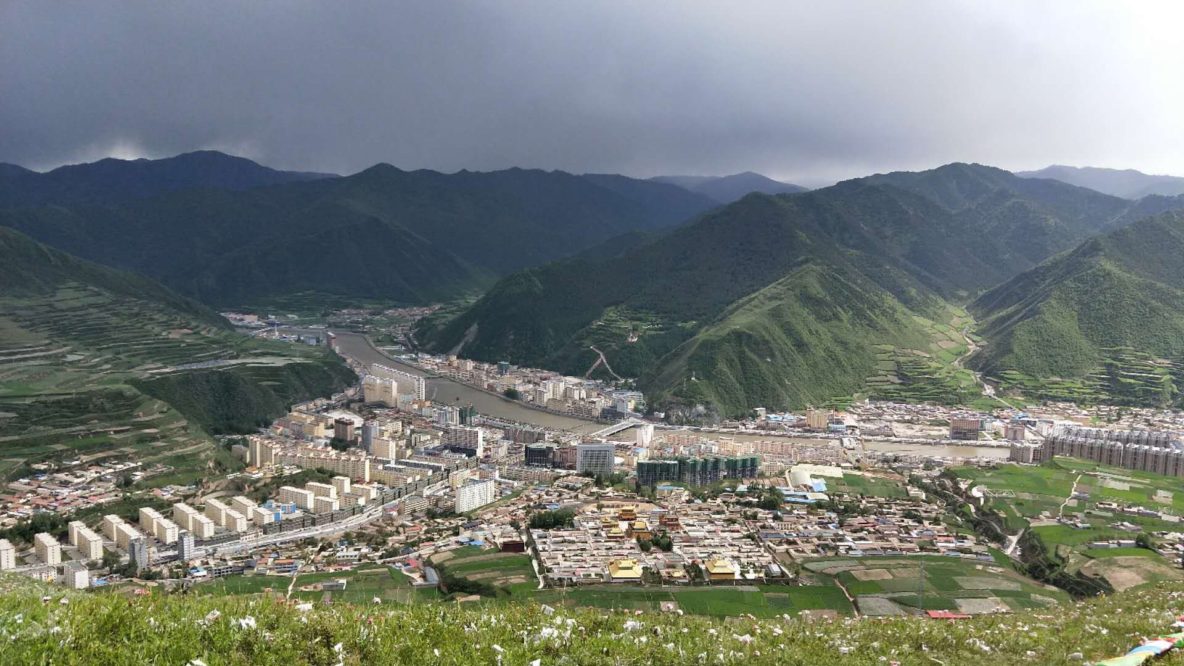 Zhuoni (卓尼）is the Chinese name for the Tibetan county of Jonê（ཅོ་ནེ།） located 2,500 meters above sea level in Gannan Tibetan Autonomous Prefecture, Gansu province. With over 100,000 people, Jonê is a mix of Tibetan, Han Chinese, Hui, Miao, and Tu minorities. Yet, the majority (70%) is Tibetan.

The History of the Kingdom of Jonê

Historically, the people of Zhouni (Jonê) were ruled by a chiefdom (“Jonê Gyabo” in Tibetan; “Zhuoni Tusi” in Chinese). The Gatsang family established the Jonê Kingdom in the fifteenth century. At the time, the Ming dynasty emperor of China recognized Chief Gatsang as the authorized ruler of Jonê and gave him the Chinese surname Yang. To this day, many Tibetan families in this area have the Yang surname. The Yangs ruled Jonê until 1949.

The predominant religion of Zhouni ( Jonê) is Tibetan Buddhism. The six Tibetan Buddhist monasteries in the region all follow the Gelug tradition. On a hillside half a kilometer northwest of the county seat sits Jonê Monastery. As one of the oldest monasteries in Amdo Tibet, it was originally founded in 1269 by Drogon Ghogyel Phakpa in the Shakya sect. Shortly after the birth of the Gelug sect by Tsongkhapa, the Jonê Monastery became a Gelug monastery (in 1459) and was led by the Gelug master Renqing Lunpo. Unfortunately Jonê Monastery was destroyed during the Cultural Revolution but was later rebuilt. At one point, it housed over 5,000 monks. Today, there are only 200.

Quaint Tibetan villages pop up along the road that winds through the beautiful Cheba valley. People here make a living from both farming and raising livestock. The youth herd yaks, sheep, and horses in the pasture, while the elderly tend farms. Houses in the Cheba valley are built with wood and are closely connected to defend against thieves and invaders. Nyiba is the largest village in the valley with over 300 households (in Tibetan, Nyiba means “sunny slope”).

The Dayu Valley is an eco-tourism area. Nine gullies come together and form a spectacular landscape. Dayu is not a well-known tourism destination (far lesser-known than nearby JiuZhaiGou), but it still offers an abundance of fascinating places to visit. Primitive forests, mountains, rivers, ancient temples, and grasslands are abundant. You can walk and hike to your heart’s content. One trail will take you on a four to five-hour adventure. If that’s too long, there is a shorter trail that is less than half the distance. Wood cabins inside the valley offer cozy accommodation where you can spend a night or two. Entrance tickets are 68 RMB per person. The average elevation of the valley is around 2,500 meters.