Standing four stories tall, spread over an area of about 25,000 square meters in the heart of Lhasa, the UNESCO World Heritage Jokhang Temple (ཇོ་ཁང་།) with its golden roof is an esoteric blend of local Tibetan elements with Nepalese, Chinese, and Indian influences.

The spinning of prayer wheels, murmur of mantras, and humble prostrations of devout pilgrims all year long but especially at Losar during the Great Prayer Festival show the significance of this revered spiritual center of Tibet.

Destroyed twice during the anti-Buddhist movements in the late 7th century and middle of the 9th century, and once during the Chinese Cultural Revolution in the 1960s, the spectacular Jokhang Temple has been regularly expanded and extensively reconstructed over the years.

The History Behind Jokhang Temple

The impressive Jokhang Temple was initiated in 647 AD by the famous King Songtsen Gampo, the first King of Unified Tibet during the Tang Dynasty. In order to strengthen ties with neighboring Nepal, he married Princess Bhrikuti in 630AD, who was the Nepalese king’s sister. In her dowry, she brought the statue of Akshobhya Buddha (or Mikyoba). Later on in 641AD, he took Princess Wencheng as his second wife, who was related to Tang Chinese emperor. Princess Wencheng also brought the statue of Jowo Sakyamuni Buddha.

Originally the temple consisted of only eight shrines. But later on it was renovated and expanded during the Yuan Dynasty, the Ming Dynasty, and the Qing Dynasty to the massive monastery it is today. 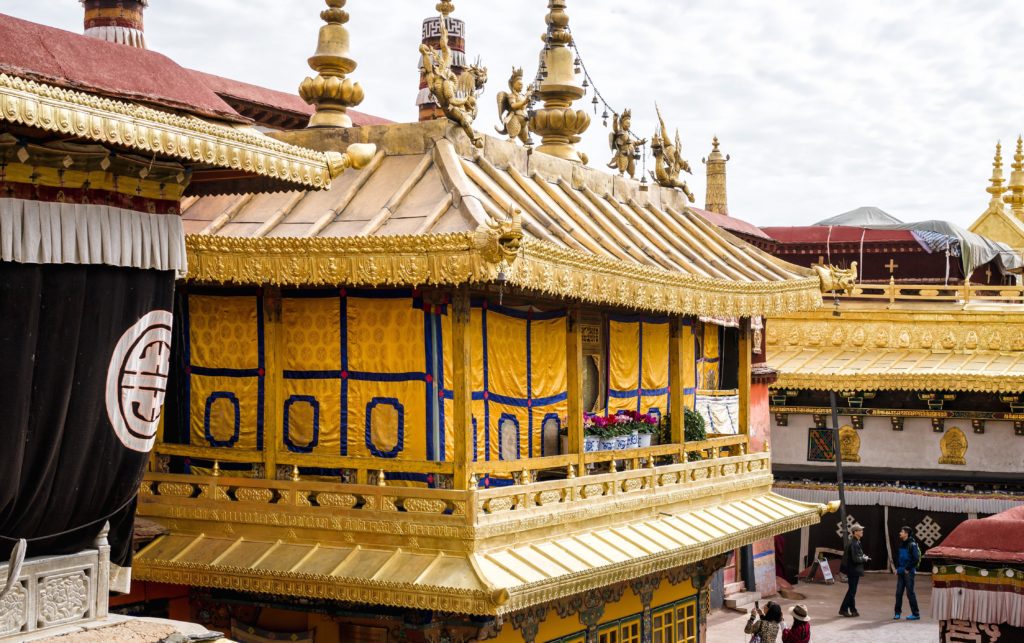 From 8 shrines, Jokhang Temple has grown across many dynasties into the impressive temple it is today

There are various legends surrounding the establishment of the Jokhang Temple. One legend states that Queen Bhrikuti established the temple to contain the statue, while Queen Wencheng picked the location according to the astrological signs and geomancy divination. Lake Wothang was believed to be the center of demonic forces and only a grand temple on the spot would drive away the evils preventing the spread of Buddhism in Tibet.

According to another legend, the King tossed his ring into the air for the spirits to indicate where he should construct the temple. Upon falling into a lake, a stupa surfaced from the water. The temple site at the lake was filled with sand carried by a thousand goats from a faraway mountain, thus giving it its first name, Rasa (‘ra’ is goat and ‘sa’ is earth in Tibetan).

The outside of the temple is adorned with the early representations of Buddhism such as deer and wheel motifs, while the interior presents a maze of chapels devoted to different gods and bodhisattvas and a significant collection of cultural artifacts surrounded by candles and incense. The holiest object in Tibet, a life-size statue of Jowo Shakyamuni adorned with jewels, is the heart of the Jokhang Temple.