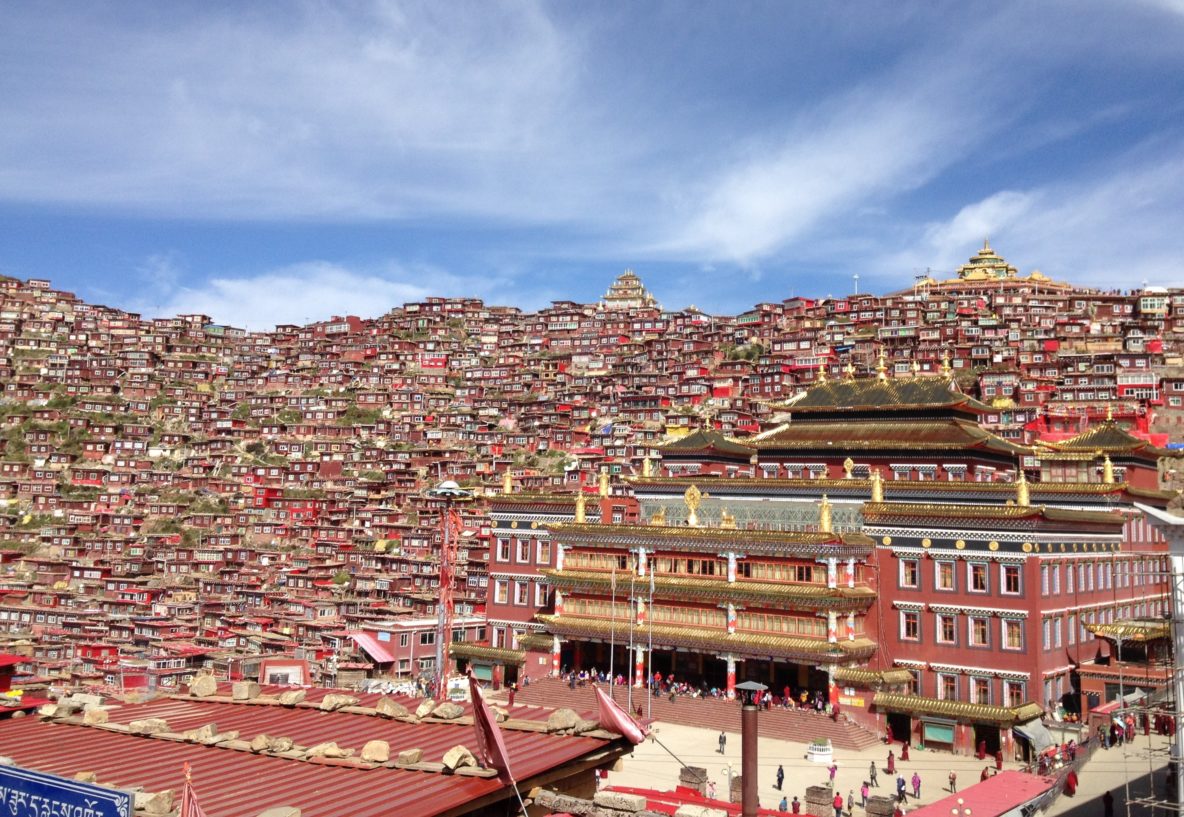 Known around the world as the largest school for Tibetan Buddhism, Sertar Larung Gar Tibetan Buddhist Institute and Monastery (གསེར་རྟ་བླ་རུང་དགོན་པ།) has caused the population of its surrounding town to grow exponentially in recent years. This monastic community is located in a remote and treeless valley of Garze Tibetan Autonomous Region, in Sichuan Province. The dormitories nearby house over 10,000 monks from all schools of Tibetan Buddhism including Gelug, Kagyu, Sakya, and Nyingma. At the center of the academy you can find the main Monastery, surrounded by living quarters, elaborately decorated Buddhists statues, and large halls for the 5:00 p.m. debates on scripture, which are open to the public. 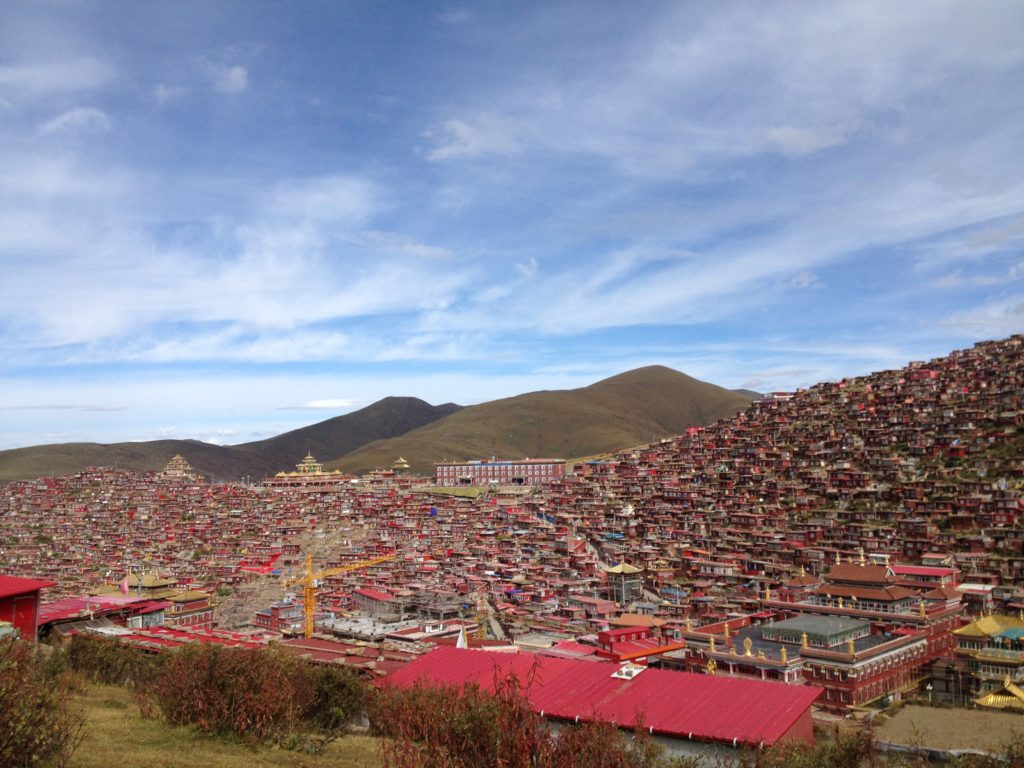 Wide view of the city, one can see the compacted housing inside Larung Gar

Sertar Larung Gar first began in 1980 after the Cultural Revolution and has been growing ever since, starting with small numbers and an even smaller community. It was founded by Master Jin Mei Pengcuo with only 32 followers. It took nearly five years for the Seda government to approve of the Buddhist’s teachings at the academy and two more years before a committee was put together to even nominate its pending name, the Seda Larung Wuming Buddhist Academy. It wasn’t until 1997 however, that the school finally received its official name and the population explosion began.

Today, people have flocked to the area, known to the Tibetans as Serthar, building homes that place the monastery at the center of the town, with some simply travelling from far away just to pray here. In fact, it is one of the most popular locations today as a final destination for those ending their pilgrimage. Many of the monks who come here to learn will stay with two or three other monks, living in small quarters for periods upwards of three years at a time. 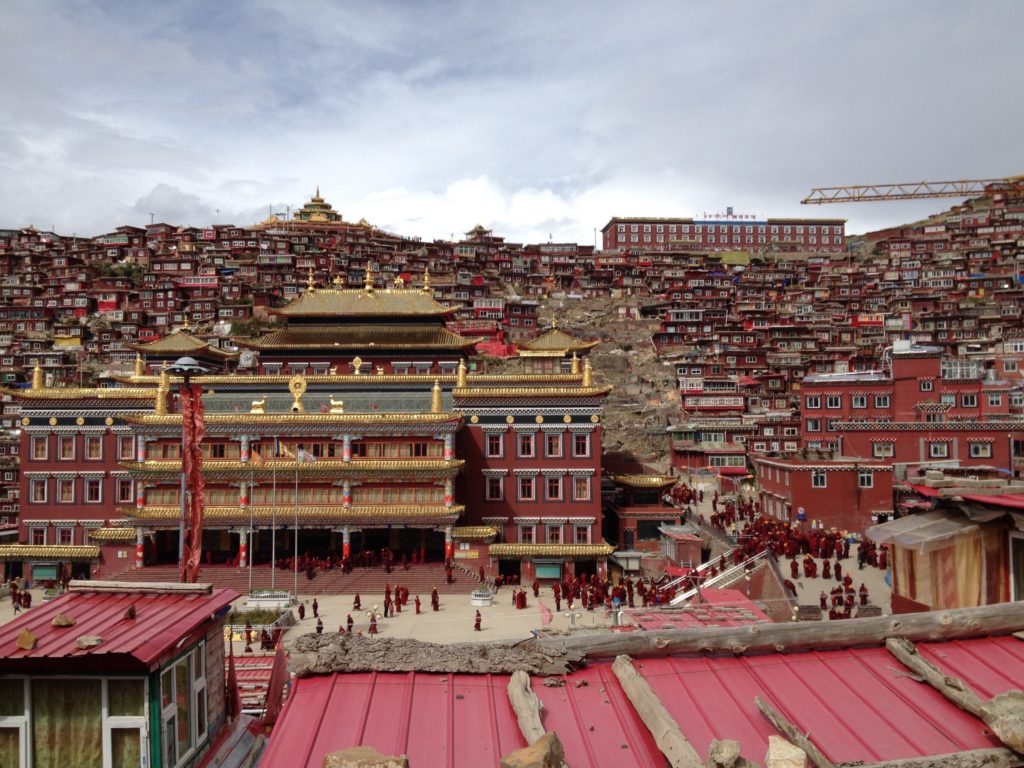 Monastery stands tall, with the movement of many monks coming to study the religion.

In contrast to many Monasteries today, Wuming Buddhist Academy is open to practically anyone wishing to learn. In fact, students can be taught in Mandarin as well as the Tibetan language and currently there are over a thousand mandarin speaking students in the community. These students mostly come from Singapore, Taiwan, Malaysia, and Hong Kong. Also surprising is the fact that almost half of the students here are women, a number not often heard around other Monastic academies.