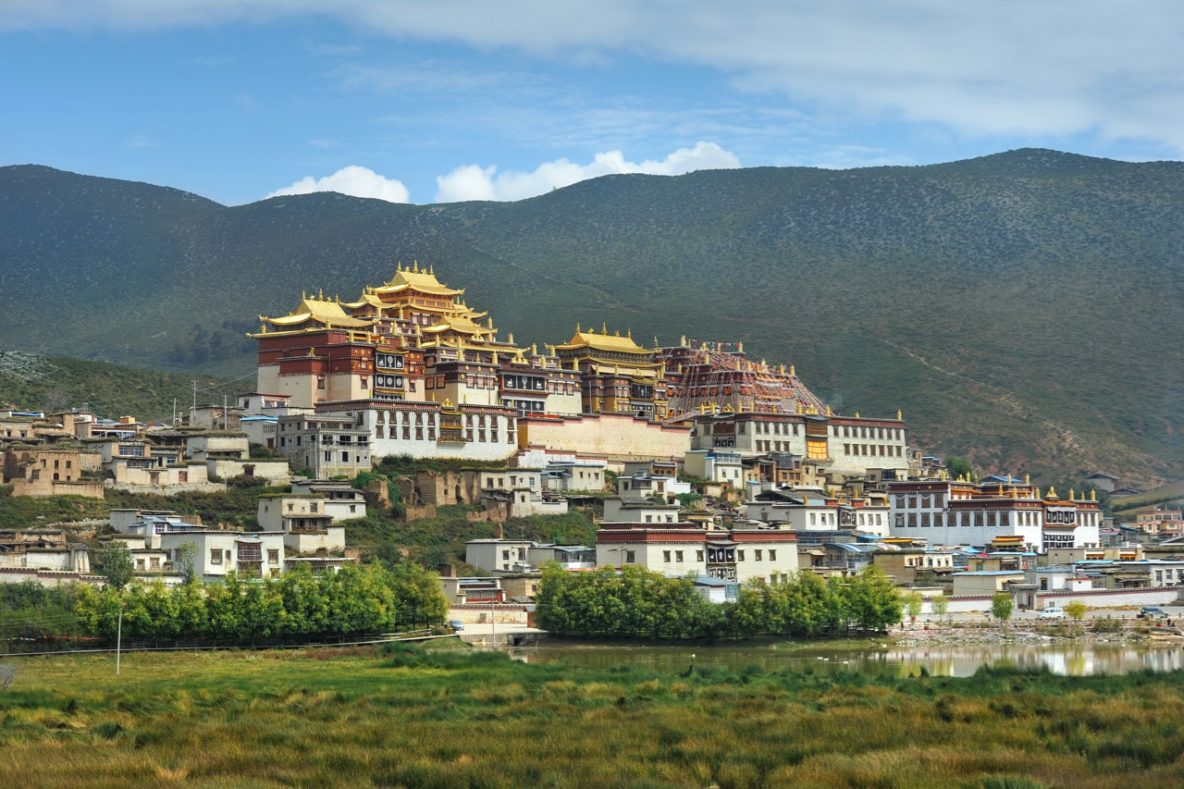 Shangri-La (སེམས་ཀྱི་ཉི་ཟླ།) is a name that conjures images of an idyllic paradise: cloud-carpeted sunrises with grassy outcroppings in a utopian society that lives in perfect harmony with nature. Zhongdian, Yunnan (now known as Shangri-La) is definitely some of those things. It has snow-capped mountains, clouds, sunrises (and sunsets), a mighty river, and remarkable gorges. It stands at an elevation of 3,000 meters in the northwestern corner of Yunnan, China. 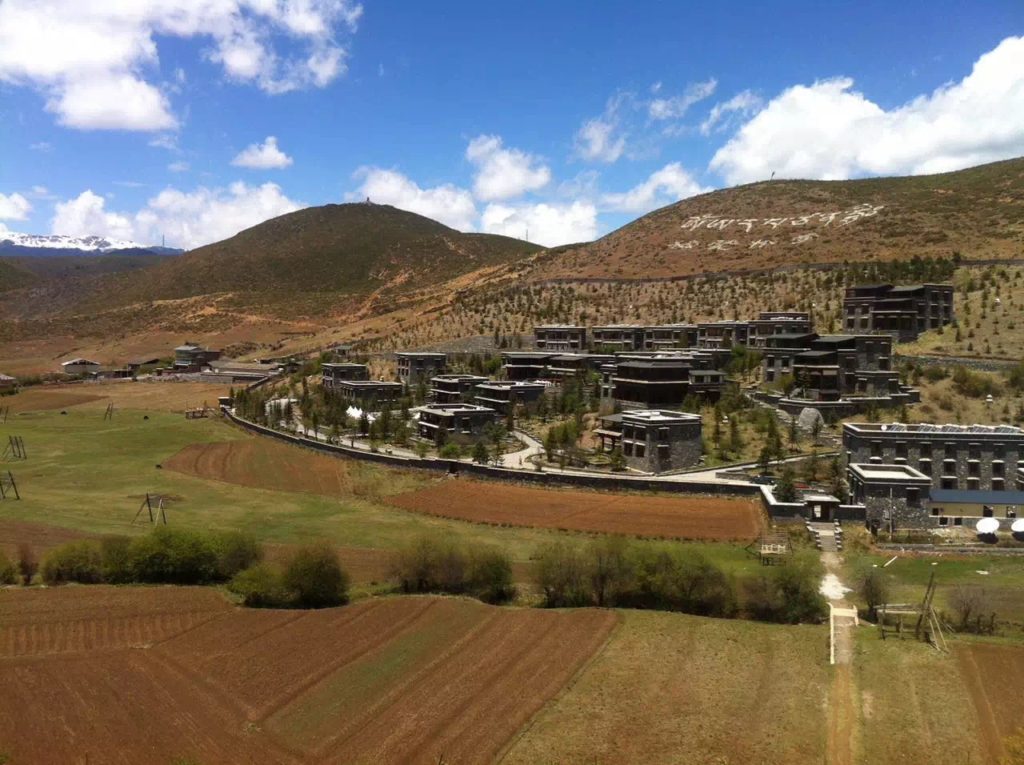 Farms in Shangrila, on the outskirts of town

Shangri-La is the capital of Deqin Tibetan Autonomous Prefecture. It is sandwiched between the Tibet Autonomous Region (TAR) to its west and Sichuan to its east. It is about 315 kilometers to the north of Dali and 659 kilometers from Kunming. Shangri-la town is at the southeastern edge of the Qinghai-Tibet Plateau and is a door to the UNESCO World Heritage Three Parallel Rivers of Yunnan Protected Areas. These three major rivers include the Salween, the Yangtze, and the Mekong. They all flow in the same north-to-south direction among the mountains.

From Zhongdian to Shangri-la

Once known as Zhongdian, the town’s name was changed to ‘Shangri-la’ to attract tourists after James Hilton’s famous novel The Lost Horizon featured a lost paradise in the Tibetan highlands. Every town in the region rushed to claim to the title. But after much effort by Zhongdian’s mayor, it won the right to wear the crown: Shangri-la. In Tibetan, Shangri-La translates to the Land of Peace and Sacredness. Originally, its Tibetan name is Gyaitang or Gyalthang which means Royal Plains. Shangri-la town is home to mostly Tibetan and Han residents. Small pockets of Yi, Naxi, Lisu, and Bai minorities also hail from here. Outside the city, the countryside is dotted with Tibetan nomads. 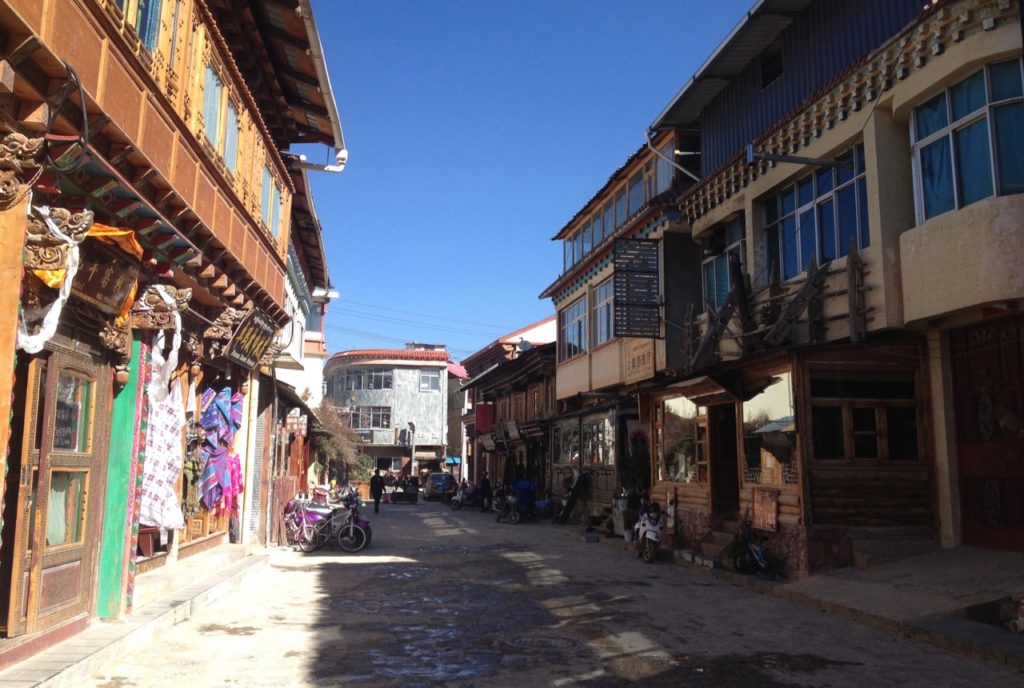 The Songzanlin Monastery is perched on a hill a few kilometers to the north of Shangri-La town. Being the largest Tibetan monastery in Yunnan, Songzanlin is home to about 700 “Yellow Hat” monks. This impressive structure represents Tibetan culture and was built in the style of the Potala Palace in Lhasa. This spiritual center hosts images of Tsongkapa and Sakyamuni. It also contains portraits of the revered tenth Panchen Lama, an important religious figure in Tibetan Buddhism. The Songzanlin Monastery was destroyed during the Cultural Revolution but has been rebuilt to reflect its past glory.

Pudacuo National Park, a treasure trove of flora and fauna, is 20 kilometers east of Shangri-la town at an elevation of 3,500 to 4,000 meters. It is one of the first National Parks in China and is part of the UNESCO World Heritage Three Parallel Rivers Scenic Area. The Pudacuo Park has diverse topography and a variety of wild animals and plants. Lakes Bita and Shudu are nestled there between forest-covered mountains.