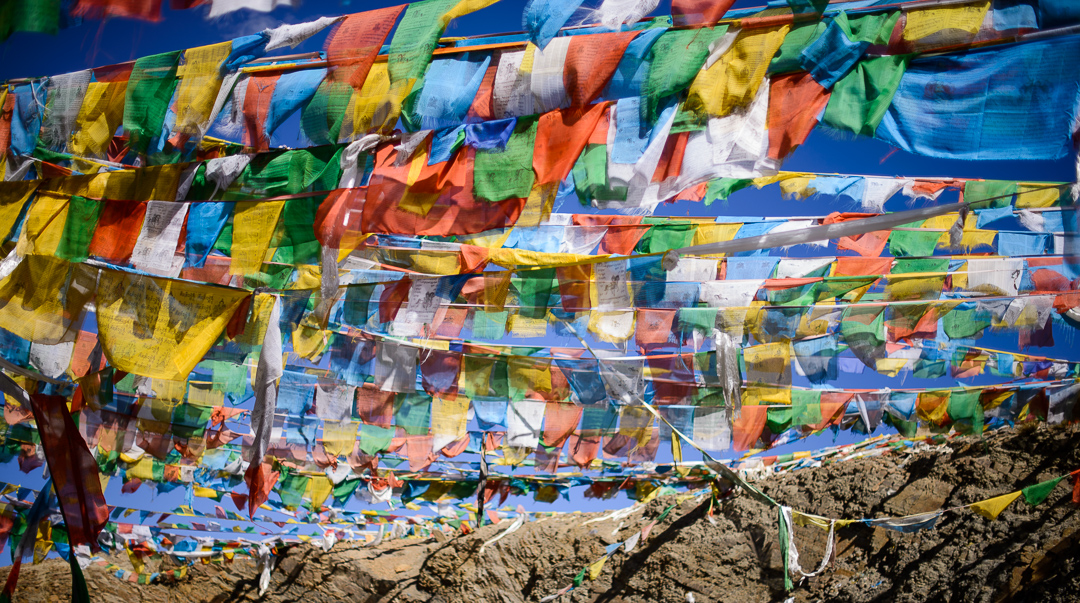 The Windhorse (དར་ལྕོག) is a legendary Tibetan creature, considered to carry prayers from the earth to the heavenly gods using the strength and speed of the wind. This basic symbol is thought to possess powerful energy—an energy that carries colossal power to the lives of all beings who come into contact with the wind.

Also known as Lung-ta in Tibetan, the Windhorse coupled with the “Wish Fulfilling Jewel of Enlightenment” is an important symbol inscribed onto Tibetan prayer flags. Although they represent good fortune and luck, Tibetans believe they actually have the power to influence events in nature and society.

Windhorse prayer flags are the most common prayer flags among Buddhists. The image of the Windhorse is drawn on the center of the prayer flag while the outside corners are guarded by the four great animals (Four Dignities): garuda (wisdom), dragon (gentle power), tiger (confidence) and snow lion (fearless joy). These guardian animals can be represented in either pictorial form or as a written word. There are also inscriptions of sutras or mantras on the flag. It is said that when the Windhorse prayer flags flap in the wind, the spiritual powers of the sacred images and scriptures benefit all those in the area.

Hanging Windhorse prayer flags is considered an act of merit that increases positive opportunities. Prayer flags are hung from high points such as trees, eaves, or on wooden poles.

History and Significance of Prayer Flags

The history of prayer flags can be traced back to the Bon traditions in pre-Buddhist Tibet when Bonpo priests used colored flags in healing ceremonies. Each color represents a primary element: earth (yellow), fire (red), space (blue), water (green), and air (white). According to the tradition, when set up around the sick, these prayer flags created a balance of these five elements in the body producing high levels of mental and physical health. These colored flags were also hung in mountains, valleys, and lakes to please local gods and to receive their blessings. If the gods and spirits became unhappy, disease and natural disasters were believed to spread.

When Buddhism first came to Tibet, Guru Rinpoche himself wrote scriptures and drew images on prayer flags. In the 15th century, printing by wooden blocks was introduced.  Famous Buddhist masters created prayer flag designs while lay craftsmen engaged in making copies. During the Cultural Revolution in Tibet, the hanging of prayer flags was discouraged, but today the tradition lives on.