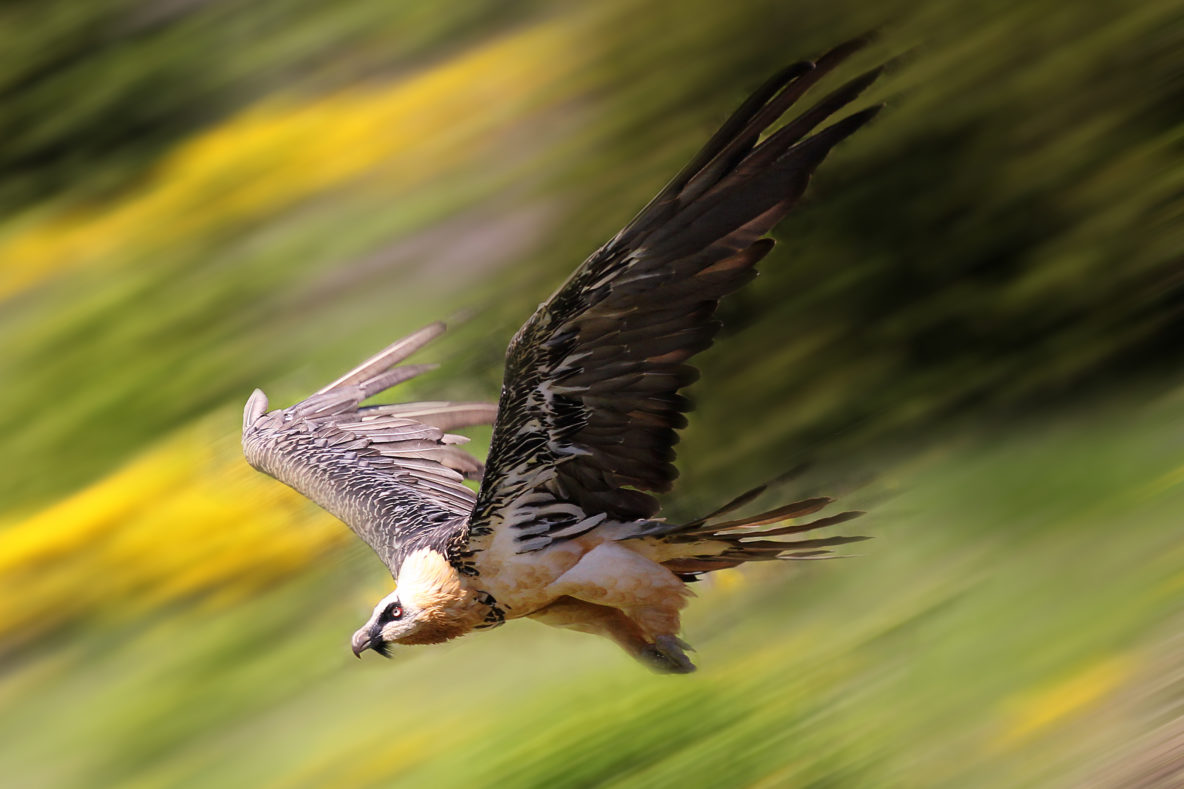 The lammergeier (བྱ་རྒོད། ) is the largest of the old world vultures and traditionally revered as the sacred bird of Tibet. The Lammergeier (which is German for ‘lamb vulture’) is also referred to as the Ossifrage (Latin for ‘bone-breaker’) and the Bearded Vulture.

Corpses are offered up to these vultures through a Sky Burial in the belief that the magnificent and elusive birds are actually Dakinis (‘sky-dancers’ or angels). Tibetan legend teaches that the Dakinis carry the spirits of the deceased into the heavenly realm where they will await their reincarnation.

The lammergeier is loved and respected throughout the Himalayans. This is due to how the vulture consumes carrion that would otherwise pollute the rivers that provide drinking water to numerous Tibetans at the roof of the world and the multitudes downstream. Donations of human flesh to the lammergeier are celebrated. Drigung Thil Monastery in Maizhokunggar County, Lhasa, is renowned for its Sky Burial site and abundance of lammergeiers. 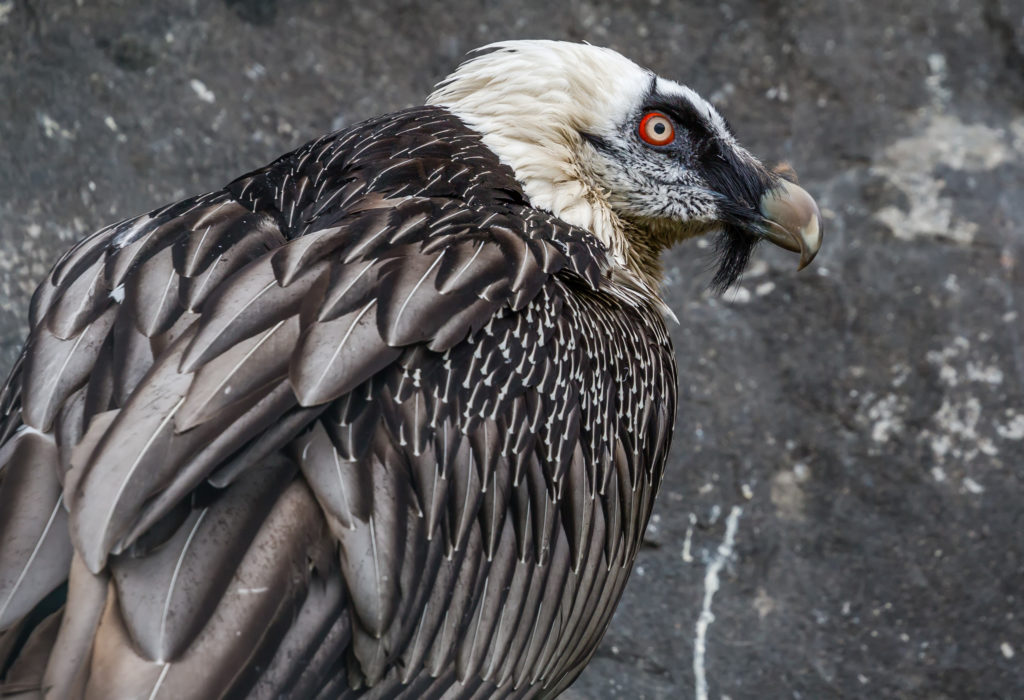 The most distinctive trait of the lammergeier is that this imposing vulture thrives almost solely on bones and marrow. The lammergeier remains the only known animal in the world with this peculiar, macabre diet.

From its aerial vantage point a lammergeier can surveil vast expanses of territory for the victims of predators or treacherous mountain gorges. After plummeting from the clouds to snatch up the bones, the lammergeier carries them to an altitude of over one hundred feet and drops them to be shattered on the rocks below. This exposes the marrow inside. After spiralling down to inspect its handiwork, the vulture will repeat the procedure if required. The lammergeier habitually returns to one location to crack open the bones. This favourited site is called an ossuary: which is defined as the place where the bones of the dead are stored.

The lammergeier can swallow entire bones up to the size of a femur. With its powerful beak the vulture often bites through and fractures bones. The gastric fluids of the bird are so acidic and caustic (with a pH of only 1) that bones are easily dissolved. Due to their unique dietary inclinations, the lammergeier encounters almost no competition for its bones, which comprise 70-90% of their meals.

The lammergeier usually refrains from preying upon living animals, however it may snatch up tortoises, hyraxes, hares, marmots and lizards. These animals are subjected to untimely deaths in the form of long drops. This vulture is even capable of dispatching animals much larger than itself. Sickly or elderly ibexes, Capra goats, Chamois and Steenboks are ambushed and battered by the lammergeier’s wings until they plunge off of precipitous mountain ledges.

Due to their size and terrifying diet the lammergeier has garnered a fictitious reputation over the years. The vulture is accused of stealing away lambs, calves and even children. Despite this prestige, the lammergeier is reportedly harmless to humans. They have even been kept as a household pets throughout history. 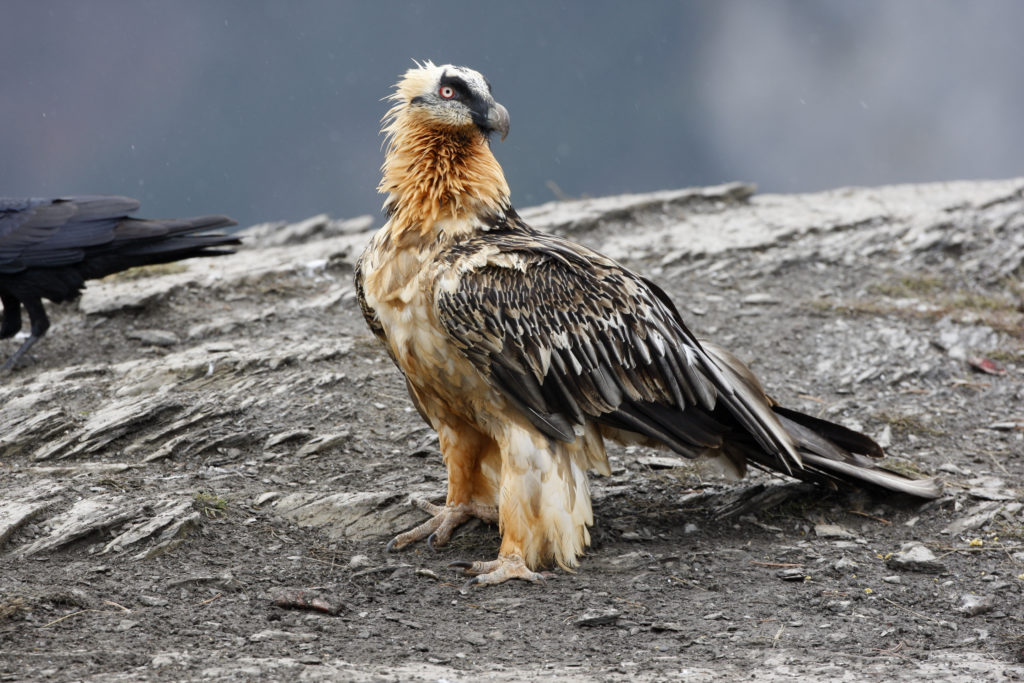 A lammergeier’s colouring can encompass every shade from snow-white to black, but the bird is most commonly a tawny brown. The vulture has a pale head, with darker tail feathers and wings. While their plumage is naturally a dappled brown, the lammergeier will stain itself a fiery orange through bathing in sulphurous mountain springs, and rubbing soil rich with iron oxide into their feathers. After applying the soil, the lammergeier will preen for over an hour to guarantee their lustrous orange sheen. The vulture is also drawn to crimson-coloured items and will collect red leaves, bark, or unattended articles of clothing.

The lammergeier bears a stronger resemblance to an eagle than any other variation of vulture, due to its feathered head and hooked beak. The lammergeier’s legs are also copiously feathered. Their curving talons are extremely prehensile and dexterous. The lammergeier possesses spots on its breast and neck, with black stripes along the head. The bristles at the base of their beak grow past the bill in tufted whiskers that provide the distinct impression of a beard.

Juveniles are notably less easy to recognize as mature lammergeiers. Their brown, patchy plumage will fade to white over the course of five years.

The lammergeier is colossal, growing up to 4 feet tall and weighting close to 15 pounds. Their wingspans can extend between 7 and 9 feet.

The lammergeier haunts the rocky crags and gorges of high mountain ranges. The vulture rarely ventures down from the soaring elevations that it calls home. During the winter season frigid temperatures force the lammergeier to descend to lower altitudes. Therefore, they become much easier to spot.

With a habitat of desolate mountain regions, the lammergeier lives between 1,300 and 15,000 feet. The vulture has even been identified on Mount Everest at the incredible height of 24,600 ft. above sea level.

Teetering on the brink of precipices and canyons, the lammergeier’s nests are haphazardly constructed from branches lined with wool, excrement, dried-up skin, and litter. The remote nests are often located near alpine pastures, montane forests or caves. The vulture will preferably roost in the vicinity of a wolf or golden eagle. These predators will provide bones for the lammergeier’s meals.

As a monogamous species, the lammergeier mates just once a year. A breeding pair of vultures will share and defend enormous territories. To protect their young, the parents will refuse to tolerate the presence of other lammergeiers. Due to the size of the lammergeiers’ dominion and their territorial nature, the distribution of the species is very sparse.

The lammergeier’s breeding season varies in timing according to geographical disparities. The courting pairs will execute breathtaking mating displays, swooping and soaring together and even interlocking their talons to plummet down till they almost collide with the earth.

The lammergeier will only lay one or two eggs at a time. An occasional third egg as a biological rarity. Nest-predating hunters are generally incapable of traversing the sheer rock walls they are required to scale in order to reach the ledges or outcrops where the lammergeier’s roost. The inaccessibility of their aeries ensures that the chicks are safe from outside threats. However, within the first couple of weeks after hatching the eldest nestling will cannibalize its weaker sibling.

The typical lifespan of a lammergeier in Tibet is 21-22 years, but vultures in captivity have recorded living over double that at 45 years old.