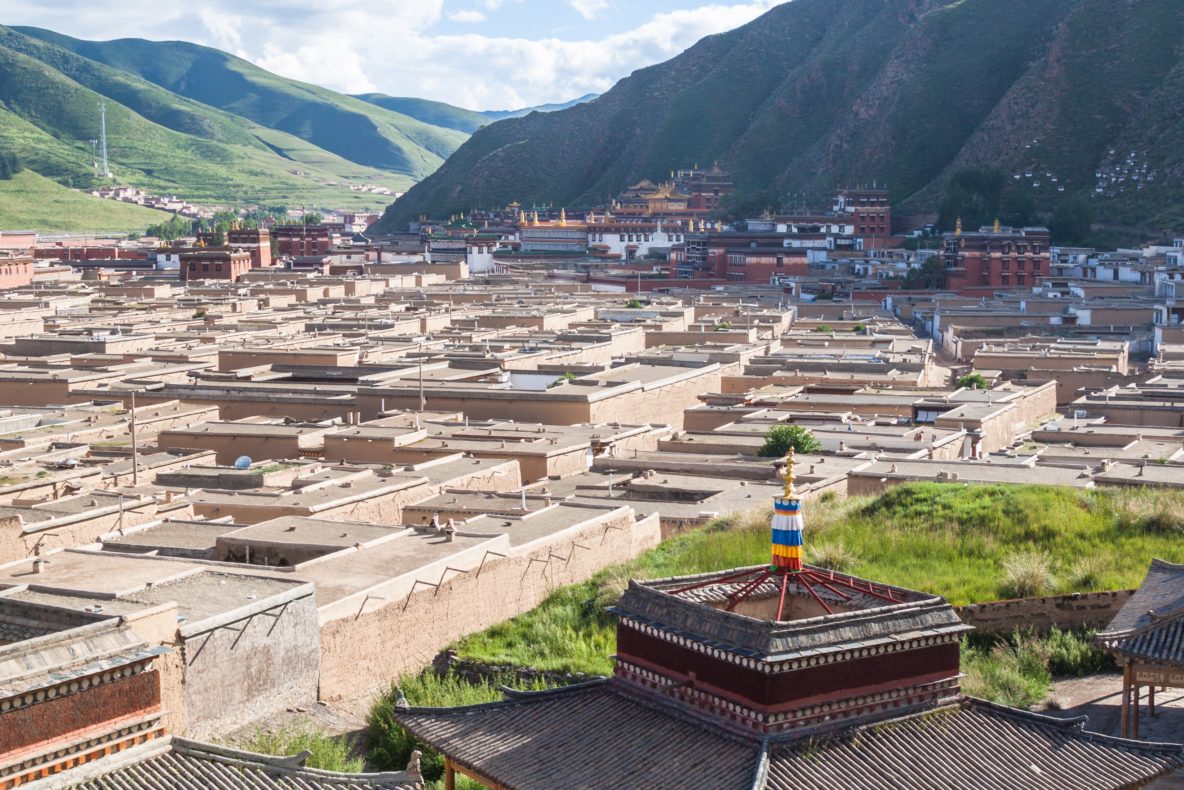 Located in Gansu Province, bsang chu rdzong (བསང་ཆུ་རྫོང་།), known as Xiahe’s (夏河)in Chinese.The main road runs parallel along the Daxia River. While some areas outside of town may have difficulties with running water or electricity, the well-worn tourist travelled areas does not experience any of these issues.  Within a short distance of the town there are many historic and natural sites to visit. Both the Sangke Grasslands and Ganjia Grasslands are home to many nomadic herders and can be reached by renting bicycle in town. To see forested areas surrounding a beautiful lake near a small Tibetan village, Darzong Lake is only a couple hours away. For those who do not wish to wander on their own, there are many guides who are willing to give walking tours of the surrounding area’s natural and amazing landscape.

Along the main road in Xiahe there is a vast array of shops selling everything from jewelry and hand-crafted items to modern clothing and fabrics, made by hand from yak wool. Bargaining is a common sight among these shops and with a little negotiation, you will often get great prices. While you may find many unique and beautiful items here among this strip, one thing to stay away from is fur. Although not every fur item here is fake, there are enough in the market to make any visitor cautious. Some fake furs may contain real hide however, and are sometimes obtained illegally from endangered species.

The most popular destination here by far is the Labrang Monastery. Some visitors spend days taking in its enormous temple and grounds. Built in 1709, the monastery was expanded over the years and has become one of six great monasteries of the Gelukpa sect of Buddhism in Tibet. Still an active monastery, there is a chance you will find the monks here engaged in a religious ceremony, while you wander freely through prayer halls, living quarters, and open grounds.

Like many monasteries, Labrang’s artifacts, walls, and history were destroyed during the Cultural Revolution. During the 1980’s much of the monastery was rebuilt. Some additions are much more recent, such as the Gongtang Chorten. For a small price, you can climb this golden topped Chorten near the river.

One of the most impressive sites of the monastery however, is the Man Jus’ri Temple, housing several extravagant Buddha statues within its walls. Often, visitors can hear the monks’ chanting echoing through the halls. Beyond the temple, quietly sitting on a hillside, is the Thangka sunning terrace. Every Tibetan New Year, an enormous Thangka is displayed across this flat slope, but every other day of the year it is a great place to get a view of the entire monastery and the hills behind it.