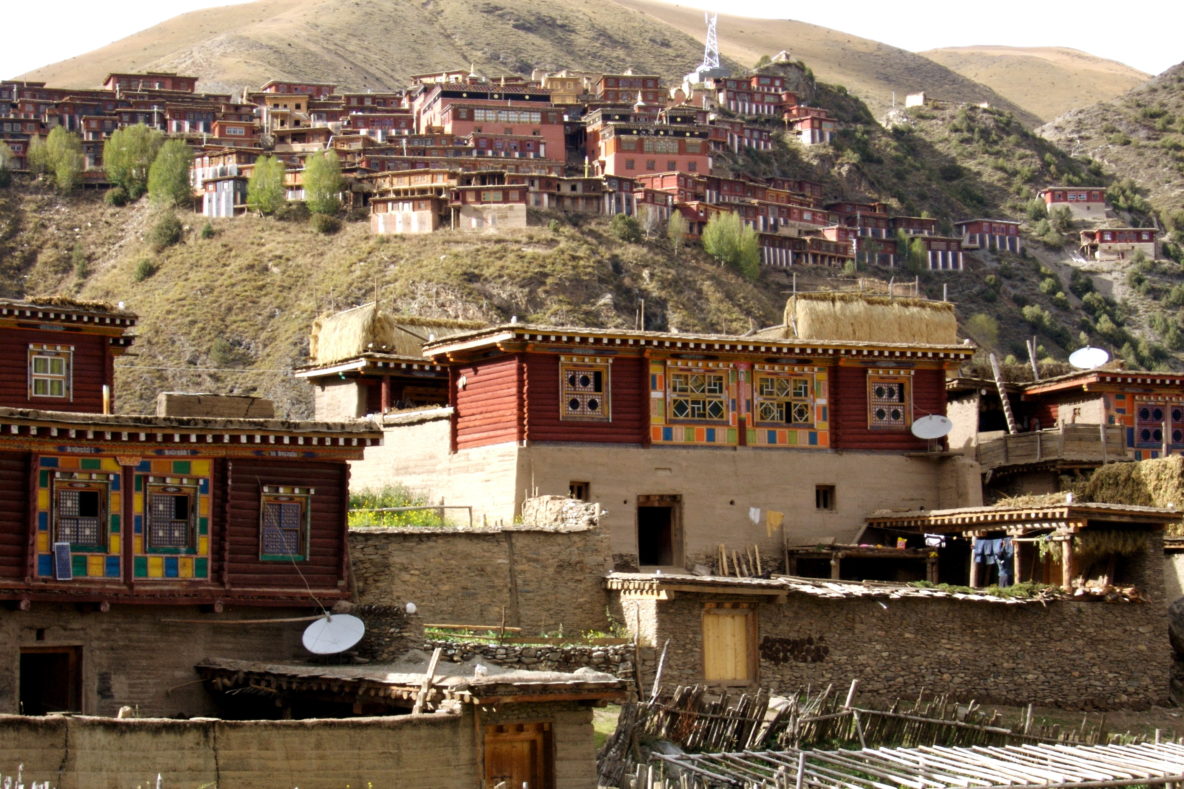 Throughout its dozen or so centuries of history, the Dzongsar Monastery (རྫོང་སར་དགོན།) has seen expansion, transformation, utter destruction and ultimately, rebirth. While it may not have been restored to its former glory, what the monastery has seen and accomplished over the years is nonetheless remarkable.

Located in Dege County, in the Garze Tibetan Autonomous Prefecture of Sichuan, the Dzongsar Monastery was founded in 746. From Dege town, it is roughly a 100km drive that takes a couple of hours due to a poor road. The first structure built here was the small Jowo-Lha-Chig-Kar-Chig temple along and shrine by a Bonpo Lama. Sometime between this event and 1275, the temple was changed into a Nyingma temple and then a Kadampa temple. In 1275 however, on a return trip from China, Drogön Chögyal Phagpa founded a new Sakya monastery on the site and has remained a part of that sect until this day.

Until its destruction in 1958, Dzongsar Monastery housed nearly 500 monks and numerous other visitors who came to the monastery to speak with the monks there. The monastery had expanded to twenty-three temples and dozens more sacred and religious halls and rooms, several of which were retreat centers. 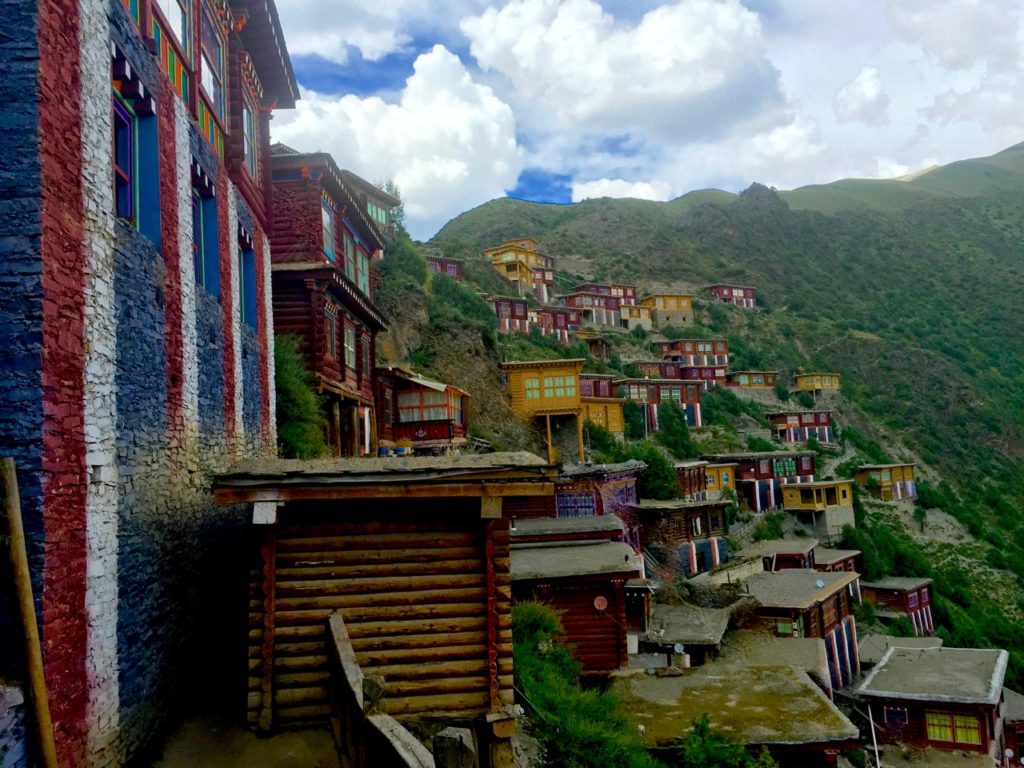 Dwellings for the Dzongsar monastic community

Having changed sects on numerous occasions, the teachings here over the years have become very flexible with eight different sects being taught at the school currently. Prior to 1958, in conjuncture with its openness to different sects, Dzongsar Monastery housed a rare collection of Rime teachings and scriptures assembled by advocates of the Rime movement over the course of many years.

Due to the violent nature of the rebellion in the late 1950’s in Tibet, all the temples at Dzongsar Monastery were destroyed including the only original structure from 746, the Bonpo Shrine. Starting from nothing, reconstruction on the monastery began in 1983 and today the monastery is only a fraction of its former glory with six temples being built since that time.

A fair amount of construction was reserved for the rebuilding of residences to house the monastic population. Because of the reconstruction, there are more than two hundred monks housed on site today and the main temples cover an area of roughly 12 acres. After years of sitting without use, the monastic school continues with its policy of openness and flexibility in its teachings. 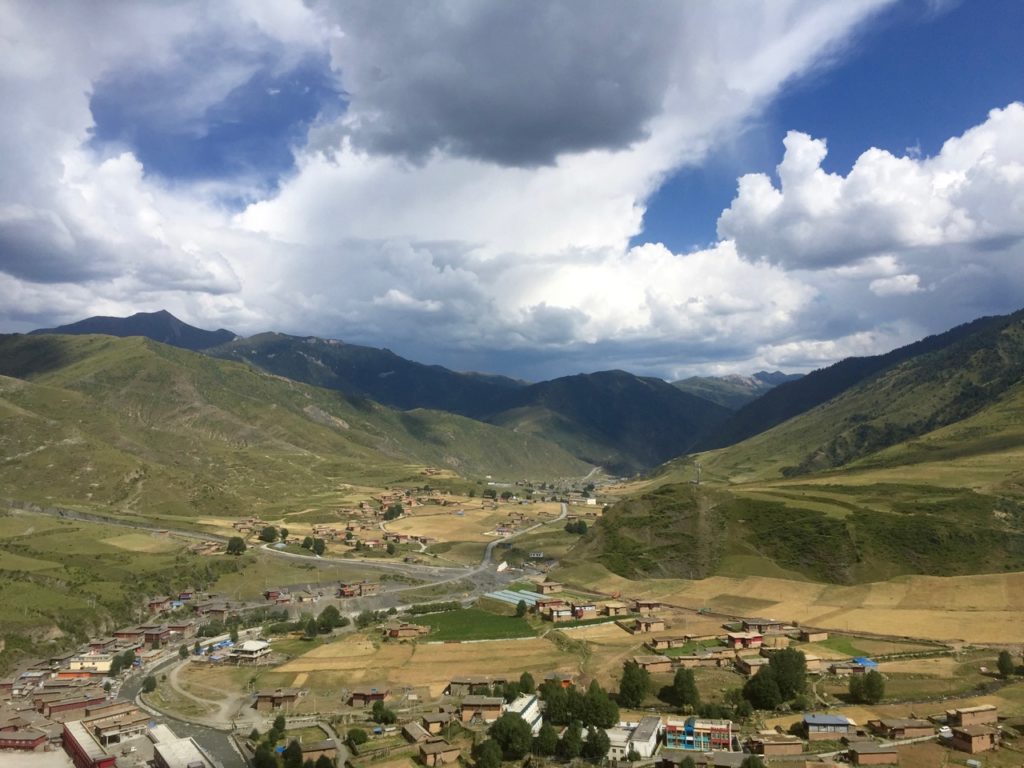 View of the valley from the ridge above Dzongsar monastery

In addition to being known for its history, reconstruction and openness, Dzongsar Monastery is also known for its incense. Dzongsar Tibetan Incense Sticks and Dzongsar Tibetan Incense Powder are the two commercially sold brands from the monastery. The incense has grown popular over the years and is even said to have a kind of healing effect on the mind, body and soul. Created from the natural herbs of the Eastern Tibetan highlands, many say the powerful incense can even prevent infectious diseases.