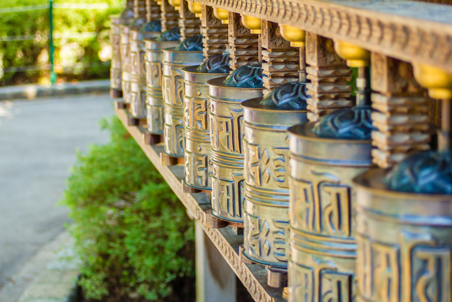 Bön (བོན་པོ། )is the indigenous religion of the Tibetans of the ancient Qinghai-Tibetan Plateau. As a shamanistic religion, it is characterized by mystic rituals, spells, sacrifices, and spirit manipulation. This religion involves much emphasis on meditative practice. It was the major religion of the people of Tibet before Buddhism found its way in the 7th century and has significant influence on Tibetan Buddhism. The current traditions of Buddhism such as prayer wheels, sky burials, prayer flags, spirit traps, festival dances, and rubbing holy stones have all come from the Bon religion.

Origins of the Religion

The followers of Bön, or Bönpo, recognize different types of the religion. The original Bön was the native religion of Tibet based on animistic and shamanistic beliefs. The first forms of the religion are known as Black Bön or Bön of the Sprits/Devils. This is because it widely relied on magic to control the malevolent spirits.

The second stage of the religion, Yungdrung Bön, was founded by Shenrab Miwoche. He is regarded as having achieved enlightenment like Buddha. Believed to have originated in the land of Olmo Lungring, it was spread by Tonpa Shenrab Miwo to the ancient Shang Shung Kingdom. Religious devotees believed the deities who controlled the world – Shepa, Dagpa and Salba- resided in ‘Sridpa Yesang’ (heaven). Tonpa Shenrab Miwo was considered as their earthly manifestation with powers to control the present.

The Bön which is followed now (known as Bönpo) is the ‘New Bon’ which evolved in the 14th Century when it took influences from Tibetan Buddhism. The Bönpo has structured doctrines unlike the original religion. This form is now practiced in the remote areas of northern and western Tibet, including in the Tashi Menri Ling Monastery in India.

Before the Cultural Revolution in China, there were more than 300 monasteries in the region belonging to this religion. The major ones included Menri and Yungdrung monasteries, which were the center of study of Bön practices.

The original religion relied heavily on shaman magical practices, mudras, yantras, and mantras. New Bön features include making a kora of religious monuments and mountains and turning prayer wheels counter-clockwise (in contrast to Tibetan Buddhism), reciting the mantra ‘om matri muye sale du’, speaking customary salutations, and performing water offerings. The religion has a number unique gods, and its own a sacred text, ‘Nine Ways of Bön’. For the religion, the holiest mountains include Mount Kailash and Mount Bonri where pilgrims are frequent.