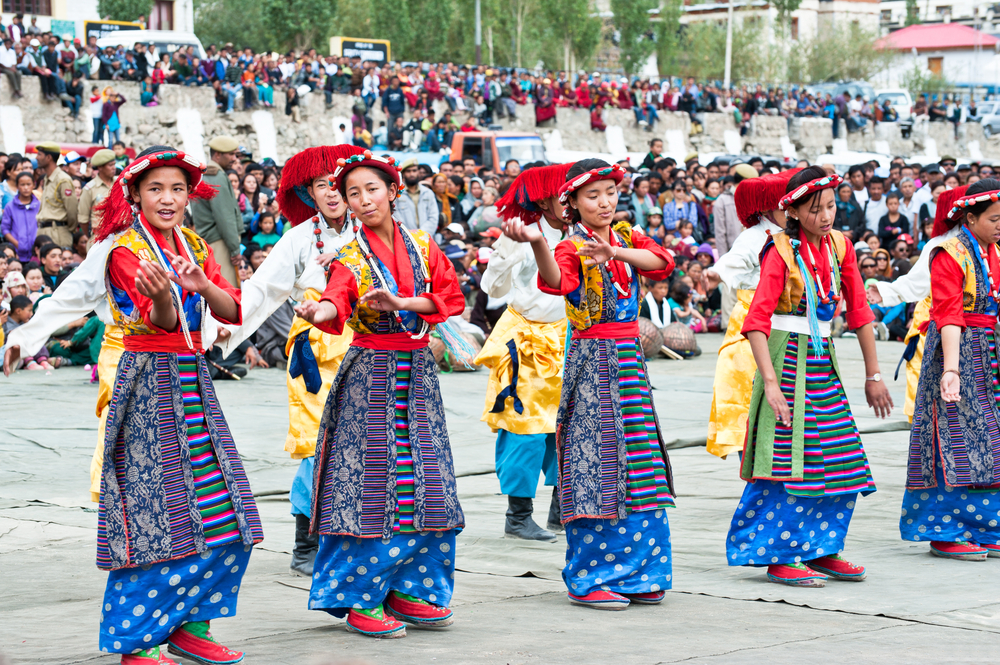 There are two types of dance in Tibet: folk dance and religious dance. Both have their own unique characteristics. The most famous religious dance is called the “Cham dance.”  Cham is a very important Tibetan Buddhism ritual. It is performed by monks wearing different masks and happens during Tibetan Buddhist festivals. The Cham dance is accompanied by music played by monks using traditional Tibetan instruments. The dance embodies moral instruction on compassion and is a type of prayer to invoke blessing. It is also believed to transform evil for the benefit of the entire world. Tibetan folk dance is common to all Tibetans, yet has distinctive local variety. “Guozhuo”is the name used in the Amdo regions of Eastern Tibet. It is essentially a circle dance. Some large guozhuomay consist of hundreds of people hand in hand. In 2014, Luqu county town was recognized as “the homeland of GuozhuoDance” so every summer thousands of Tibetan people from different regions gather in Luqu to join the annual dance contest.

The folk dance style used in Batang is called “Xiezhou.”Men and woman dance face-to-face, in two lines, to the accompaniment of a stringed instrument. It is usually directed by one person at the head of the formation. Sometimes, men play the stringed instruments while women dance to the music. “Zhuoxie”is another popular folk dance in the Lhasa and Shannan areas. It is usually performed at ceremonies of blessings and for welcoming guests. While there are many other forms of folk dance across Tibet, these three are some of the most widely used. Dancing in Festivals and Ceremonies

Tibetan dancing always accompanies festivals and celebrations. These festivals are usually held in beautiful locations in the summer or fall. They may last for a few days and can include setting up tents, cooking extravagant meals, making butter and milk tea, offering rituals to local deities and even horse racing. These gatherings are always great opportunities for dancing, singing and playing. People dress up with their traditional clothing and make a big circle around a campfire and dance as they sing. Wedding celebrations have lots of dancing and singing. People send their best wishes and blessings to the bridegroom and bride through their traditional dance and folk songs. Overall, dancing is a very important part of Tibetan culture. It is through dance and song that people express their happiness and gratitude for the good things in life.